The note of Image generation from scene graphs

Previous work only performs well on limited domains such as followers or birds, but struggle to generate complex sentences with many objects and relationships.

This paper proposes a method for generating images from scene graphs with graph convolution which enable reasoning about objects and their relationships. 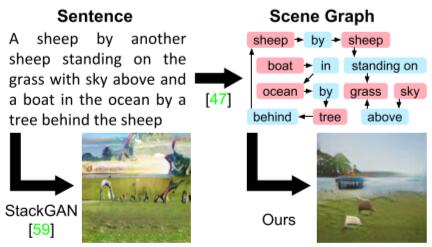 Firstly, embedding vectors representing objects and edges were generated from graph convolution network, which is then concatenated to predict bounding boxes and segementation masks for each predicted object.

After obtaining the scene layout, which contains several bounding-boxes and masks, this high-dimensional representation is fed into cascaded refinement network TODO combined with noise to generate the final result.

As the first stage of processing, each node and edge of the graph from the dataset is converted to a dense vector by an embedding layer, analogous to the embedding layer which is used to get word-embeddings in neural language model. 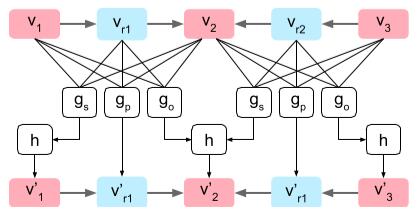 As the picture shown and concretely speaking, the output vectors $v_{i}^{\prime}$ for edges is simply computed by $v_{r}^{\prime}=g_{p}\left(v_{i}, v_{r}, v_{j}\right)$, while the calculation of objects vectors is a bit more complicated since the same object may participate in many relationships, e.g. A car is on the street. The street is besides the buildings. where ‘street’ acts as the starting node in the first edge while being the ending node in the second.

After embedding vectors for objects was obtained, which aggregates all information across all objects and relationships in the edge, scene layout will be calculated to give the coarse 2D location information.

As below image shown, mask regression network and box regression network are built to predict a soft binary mask and a bounding-box respectively. The previous consists of several transpose convolutions terminating in sigmoid nonlinear function so that the mask lies in the range $(0,1)$ while the second is a MLP.

This network consists of a series of convolutional refinement modules, doubling the resolution and proceeding in a corase-to-fine manner.

Each module receives both the scene layout and the output from the prvious module as its input, concatenated them channelwise, upsampling them with nearest-neighbor interpolation and then passing it to the next, and finally generate the output result.

A pair of discriminator is built.

The loss consists of six components.